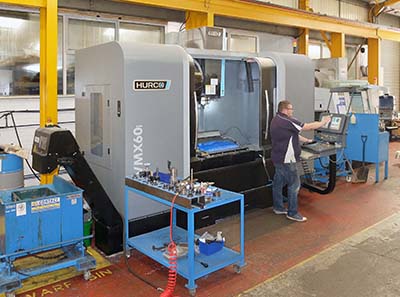 PAB Coventry, which produces sheet metal components, pressings and fabrications in quantities from prototypes up to 10,000 per year, has since early 2016 invested £1.5m in new machine tools, which now include a Hurco vertical machining centre. The company also bought a second and third industrial unit in Canley, increasing floor area by two-thirds.

Underpinning this expansion is strong growth in sales to the automotive sector, which accounts for 90% of turnover. TS16949-accredited PAB specialises in fabricating sub-frame pressings, bracketry and grilles, as well as assemblies such as windscreen surrounds for Aston Martin, Lotus and Triumph Motorcycles.
The company, which operates 24/7 with close to 100 employees, is also moving strongly into the rail industry and has recently used its AS9100 quality accreditation, gained through earlier military work, to win contracts in the aerospace sector.
As a result of this growth, Mark Brazier, second-generation director at the family-owned pressings subcontractor, decided to bring some of the manufacture in-house.
“We already had a smaller Hurco machining centre and one of their CNC lathes, which we bought about six years ago to help fulfil a defence contract involving manufacturing blast seats for military vehicles,” he says. “We had no hesitation in returning to the same supplier for a bigger machining centre to address our toolmaking needs.”
The three-axis Hurco VMX60Ti now produces 35% of the subcontractor’s tools, while additional duties include the manufacture of inspection fixtures and composite try-out tools, milling and drilling of large parts such as door sills, and the production of smaller components such as bosses and machine pins if the other machining centre is occupied.
For further information www.hurco.co.uk