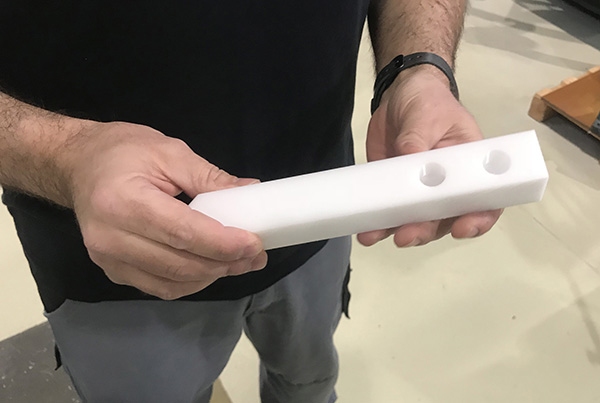 In 1979, Harlow-based TK Fabrications opened its garage door for business. Today, almost 40 years after the father and son company was conceived, the third-generation family business is filling its impressive new factory with high-end machine tools, the latest addition to which is a Fanuc RoboDrill D21MiA5 five-axis machining centre.

As a manufacturer that exclusively machines plastic and composite materials, TK Fabrications has a machine shop packed with high-end turning centres, machining centres and routing machines. These machines are tasked with manufacturing anything from prototype to 1000+ batch runs that are supplied to customers around the UK, Europe, China, Malaysia and the US. Fanuc has been supporting the growth of the subcontract company since 2002.
Recalling the introduction to Fanuc machine tools, company director Sam Howlett says:
“The first RoboDrill, a T14iB arrived in 2002 with a 4th-axis Nikken rotary unit, which was fantastic. We then bought a used Fanuc and had Fanuc engineers to do some work on the machine to keep it up to the required specifications. We kept that machine for five years. Now, we’ve invested in the new five-axis RoboDrill D21MiA5 and it’s outstanding.”
The reason that TK Fabrications has continually invested in Fanuc technology is two-fold: performance and reliability. Referring to the reliability of the Fanuc brand over the 16-year duration, Howlett says: “Throughout our ongoing growth period, Fanuc has helped our small business to save money, telling us we didn’t need a service contract because the machines don’t breakdown. They were 100% right. After all these years, the machines have never broken down. We’ve had Fanuc come in and do some work, such as lowering a machine after integrating a Microloc work-holding unit. They have also done some other retrofit work, but never attended a breakdown.”
This reliability is a critical aspect to any subcontract manufacturer, as Howlett confirms: “The ability to get finished parts out of the door to meet customer deadlines is a business-critical factor. Failure to meet deadlines has consequences; luckily we buy Fanuc machines so this isn’t an issue. Over the last year, we manufactured over 155,000 components with 98% on-time delivery and the remaining 2% delivered early. Fanuc machines played a considerable role in achieving these statistics by never failing us. Any machine tool failure would be detrimental to these statistics.”
From a productivity perspective, Howlett says that the Fanuc machines have always been streets ahead: “Even the older Fanuc machines have a 15,000 rpm spindle with 54 m/min rapid traverse rate.” 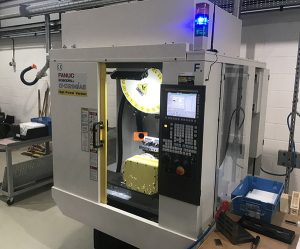 Despite the glowing productivity endorsement of the RoboDrill series, the latest five-axis RoboDrill D21MiA5 has taken TK Fabrications to the next level.
“The D21MiA5 is swallowing work from the other machines on our shop floor,” states Howlett. “It’s giving us more capacity throughout the factory and this is because the new RoboDrill is so much faster than our existing plant list.”
This factor is demonstrated with a plastic component that has a total machining time of 2 minutes 53 seconds, which includes drilling a 170 mm deep hole and then rotating the part to a secondary set-up for machining all faces. The component was previously machined in 6 minutes on an alternate machine, thus cycle times have been cut by over 50%.
Another rectangular plastic part machined on the new D21MiA5 is clamped with two Lang vices and drilled to a depth of 300 mm. This component is being machined in less than 5 minutes, whereas the previous total machining time was over 20 minutes.
The 3+2 configuration of the RoboDrill D21MiA5 is ideal for TK Fabrications as it has no specific requirement for full simultaneous five-axis machining.
“The process to configure the machine from 3+2 to full simultaneous five-axis is simple for Fanuc, and we thought we would have requested it by now,” says Howlett. “However, almost all our jobs only require 3+2 machining, and with the capability of the new Fanuc, it is increasingly close to capacity with no simultaneous five-axis work going through it. This is because it is drawing more work from less productive machines.”
The latest RoboDrill incorporates a Big Plus BBT spindle configuration and more than sufficient capacity in the X, Y and Z axes. In fact, TK Fabrications specified the new addition with a riser block at the rear of the machine to lift the five-axis unit by 50 mm. The purpose of this request was to give the company greater swing capacity, which facilitates the machining of larger components.
Primarily machining plastics and composite materials, TK Fabrications runs every machine without coolant. With the Fanuc RoboDrill, this concept has seen a central dust-extraction system fitted to remove airborne dust. 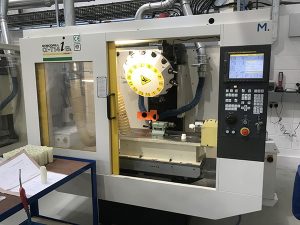 “The airborne particles are collected via the extraction unit and the machine base is cleaned every 30-40 parts to remove chips,” explains Howlett. “Swarf is automatically blown from the work area as we have a through-tool air blast. This capability keeps the cutting tools at an optimal temperature, clears the work envelope and improves processes such as tapping and deep-hole drilling. The air blast works at 6.2 bar and has been a revelation for us. It stops the tapping process from binding-up, is more productive and delivers extended tool life.”
In conclusion, Howlett says: “Fanuc have been an outstanding machine tool partner. The reliability and machine uptime is amazing, while the service and applications team are extremely helpful and supportive. In short, the technology, speed and capability of the RoboDrill series is perfect for our business.”
For further information www.fanuc.eu