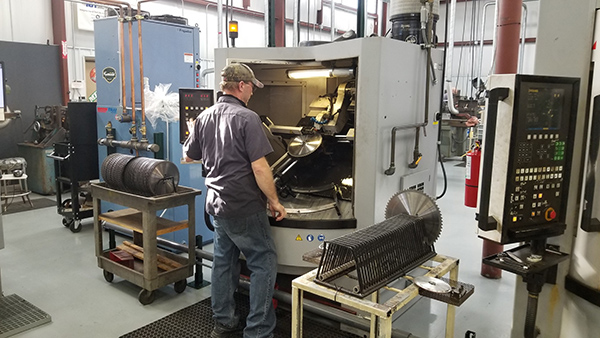 Wisconsin-based Integrity Saw & Tool has purchased a Vollmer CHX 840 circular saw blade sharpening machine with the Vollmer HS automated loading station to provide capacity for a significant order the company has won from a new pallet manufacturing customer. The Vollmer machine has increased productivity by 60%, permitted unmanned running and improved blade quality. Without the new CHX 840, fulfilling the new order “would have been impossible”.

It is a familiar tale when an engineer leaves his job and sets up a business from his garage. In the case of Integrity Saw & Tool, a saw sharpening, HSS drill and end-mill regrinding company, the story begins in a basement in 1986. However, it was the move to a 13,000 sq ft factory in 1998, the appointment of Paul Reetz as the fresh-faced sales engineer (now the company’s owner) and investment in its first Vollmer CNC sharpening machine in 2000 that set the company on a new growth trajectory. With 13 staff and an output of 100 saw blades a week back in 2000, this figure quadrupled to almost 400 blades a week by 2005.

“We bought our first machine in 2000, a Vollmer Akemat B4 and, over the next eight years, more Vollmer machines followed,” says Reetz.

In fact, the company acquired a further three machines, with an Akemat U10 and B10 arriving in 2005, followed by an additional Akemat U10 in 2006.

The Vollmer Akemat machines sharpened TCT saw blades while the company’s manual machines manufactured and serviced HSS blades. This investment completed the purchasing of Vollmer machines until the 2019 arrival of the CHX840+HS. 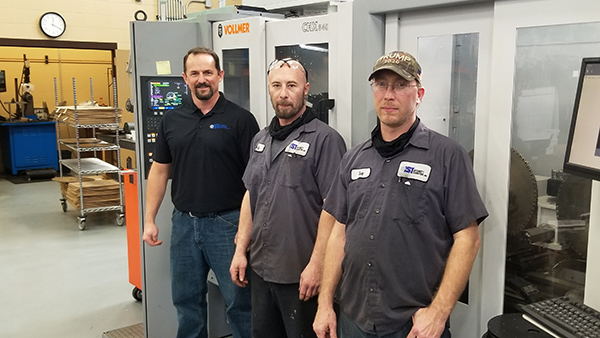 Says Reetz: “The saw sharpening side of the business had grown for almost 10 years, but unfortunately the 2008-09 global recession wiped out a lot of small businesses. Many of our circular saw blade customers witnessed the collapse of their companies. However, the production of round tools such as drills, end mills, router bits and special tools for the manufacturing industry weathered the market far better. Round tooling for industry currently accounts for 80% of our business. With the COVID-19 pandemic, our round tooling business has slowed down. However, as more people are confined to staying at home, they are investing in their homes and the saw division of our business is once again benefitting.”

The pandemic situation has seen people confined to their homes all around the world, with everyone spending more time and money on groceries and eating at home. This situation has delivered a unique opportunity for Integrity Saw & Tool. With millions of wooden pallets in circulation in the US food industry, Integrity is regrinding TCT saw blades for a leading pallet manufacturer. This new customer has ambitious plans to build multiple manufacturing facilities across Canada, the US and Mexico, with each plant capable of producing a pallet every minute.

Integrity Saw can support the new customer with its five-axis Vollmer CHX840+HS for machining the tooth faces and tooth tops of the TCT saw blades in a single clamping. The HS automation solution enables Integrity Saw to load and process 28 blades unmanned. With a customer that will run its operations 24/7 and will require a new saw blade for every shift at every facility, the opportunity for Integrity Saw & Tool is considerable. 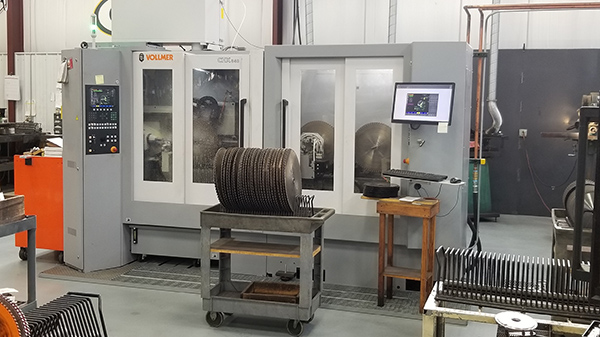 Following the arrival of the Vollmer CHX840+HS, Integrity has rapidly ramped-up to the stress-relieving and re-grinding of 400 TCT blades every week from May 2019 – an impossible feat without the new machine.

The 457 mm (18”) diameter TCT blades have 70 teeth per saw and it is possible to re-grind each blade up to seven times before being replaced or re-tipped. Before the arrival of the CHX840+HS, Integrity Saw was conducting four operations on three machines to complete a saw blade in 75 minutes – a machining time not inclusive of set-ups and changeovers.

“When it came to programming time and repeated set-ups, it was approximately 90 minutes for each blade,” says Reetz. “The Vollmer CHX840+HS has cut this time by more than 60% to 35 minutes with just one stress-relieving operation before the CHX840 completes all tooth and face grinding in a single set-up.”

For the 27-employee company to have just two skilled operators running four Vollmer Akemat machines and the CHX840+HS; the new machine has doubled the weekly output with the same number of staff.
“The two operators previously had the capacity to do 40-50 TCT blades a day on the Akemat machines, but adding the Vollmer CHX840+HS means we can now re-grind over 100 blades a day,” explains Reetz. “We work from 05:00 to 15:00 and the HS automation system allows us to set the CHX840 machine so it processes up to 28 saws unmanned throughout the evening.” 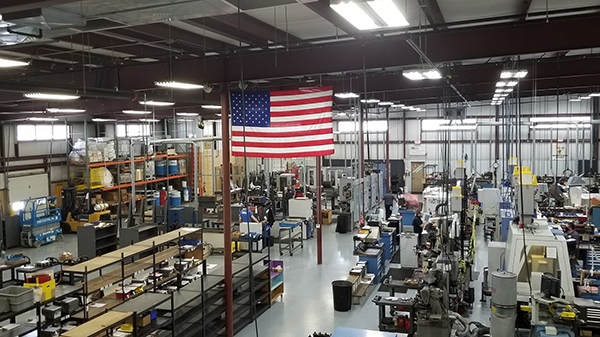 Although the new Vollmer has increased productivity and capacity; the benefits reach much further. Integrity Saw has recognised that the ability to grind tooth tops and faces in a single operation has the potential to make single-purpose machines redundant in the future. With a single ‘compact-footprint’ Vollmer machine, Integrity can significantly increase output while reducing machine inventory and running costs.

From a programming perspective, the operators undertook 2½ days of training on the CHX840+HS.
“While the older machines have all the programs stored, the Vollmer CHX840+HS didn’t initially have that luxury,” says Reetz. “However, the easy-to-use CNC interface means our operators don’t have to program every blade from new – they can simply edit one of the hundreds of stored program templates within the software to generate a suitable wheel path. This means it is possible to program a stack of 28 saws for unmanned running in just over 5 minutes.”

Additionally, the operators no longer have to be concerned about grinding wheel offsets as the CHX840+HS automatically compensates for wheel degradation. The combination of probing, automated wheel offset calibration and the intelligent software on the CHX840 also eliminate the potential for operator error and collisions.

With the pandemic gradually subsiding, the Vollmer CHX840+HS will eventually reach capacity in line with customer demands for more saw blades. Integrity already has its sights set on a second Vollmer TCT saw sharpening machine with automation to meet these production demands. Furthermore, the company has been so impressed with the CHX840+HS that it is now considering the latest generation Vollmer machine for its rotary tool division.