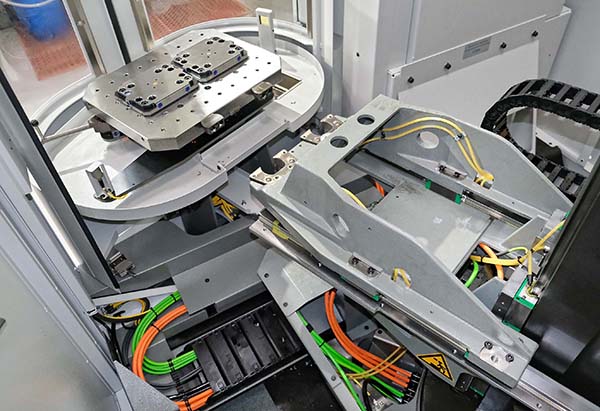 Founded in 1984 and having moved repeatedly to larger premises to cope with almost continuous growth in turnover, subcontractor Norjon Precision Engineering expanded yet again at the end of 2018 with the acquisition of an adjacent unit on the Quay West Business Centre in Gosport, which enlarged the factory to 17,500 sq ft. Alongside this increase in shop-floor space, the firm has invested substantial sums year-on-year, with £2m spent during 2018 and 2019, and £1.2m of capital plant for 2020, some of which has already been delivered. 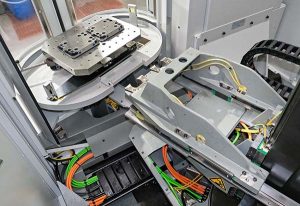 A pivotal moment in the accelerating rate of Norjon’s development was the decision in 2016 by owner and managing director Kevin Fox to automate a large proportion of production. The latest machine acquisition is a Hermle C400 five-axis milling centre fitted with the manufacturer’s HS Flex automated storage and retrieval system for eight 500 x 400 mm pallets. This turnkey cell, with touchscreen control for smart order management and connectivity for remote monitoring, was supplied by UK, Ireland and Middle East agent, Kingsbury.
The new cell has joined two automated Hermle five-axis cells delivered in 2018, a C22U and a C12U, both equipped with Erowa storage systems for exchanging smaller pallets. A further Hermle C12U was delivered in February 2020 equipped with a Dutch-made Halter robotic system for automated component loading and unloading around the clock, initially of vehicle engine parts. In total, taking into account three Hermle machines bought in 2017 and 2018, and legacy models from 2007 and 2012, plus a mill-turn C42U previously used by the AMRC and a larger C52MT mill-turn with a 1 m table that arrived in March 2020, Norjon operates nine of these German-built five-axis machines. 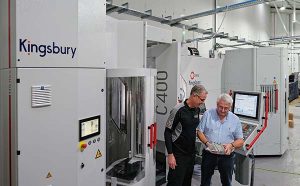 Says Fox: “In 2016 we often made batches of six-off prismatic parts of fairly high complexity. Even though we are a long-time user of five-axis equipment, which helps to make components in one hit and mitigate some of the time and cost of manufacture, it was easy to lose money on those jobs with all the programming and setting that was needed. So we took the decision three years ago to go after contracts for much larger batches of components, more like 50- or 60-off, but still complex in nature requiring substantial machining time.
“Then, one of our established customers in the medical industry ordered larger volumes of parts that we were already making,” he continues. “It was the trigger for us to move towards automation with the purchase of the first Hermle five-axis cell.”
Fox adds that Norjon operates four automated prismatic machining centres, including one from another supplier, and now has a fifth with the arrival of the Hermle/Halter cell. They allow virtually continuous production with minimal operator supervision throughout the night and at weekends, as well as during the day. He says the factory “really sings” now when he goes on to the shop floor, whereas before some machines might not be running as they would be waiting for fixtures or programs. Fox describes the difference as “amazing”.
The automated cell comprising the C400 and HS Flex has been installed in the factory extension together with the existing C20 and a spark eroder. Featuring storage for eight pallets on four levels and extended tool capacity totalling 81 positions, the Hermle was purchased to fulfil a contract requiring the delivery of 10 assemblies per week for a customer in the automotive industry. The two parts, towards the larger end of components produced at the factory, require 10 hours’ and 5 hours’ machining respectively from solid aluminium, and were initially milled and drilled on an unautomated C400. Considerable extra capacity has been gained due to the HS Flex running unattended for long periods. 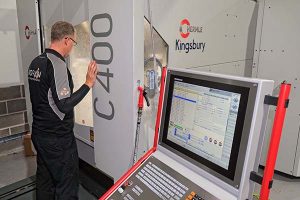 Norjon now concentrates on working for four large corporations in the medical, food, automotive and marine propulsion industries. In the case of the latter sector, the company has recently become a preferred supplier to BAe Systems Maritime, which was the reason for installing the first Hermle mill-turn centre, as it allows turning of parts up to 800 mm in diameter and prismatic machining within an 800 x 800 x 550 mm working envelope. The new C52MT extends mill-turn capacity to nominally 1 cubic metre.
Fox concludes: “We started buying five-axis Hermle machining centres back in 2007, as we could achieve an almost polished finish when manufacturing aluminium and brass thermoforming moulds for the production of plastic food packaging. For our latest round of investment, we have returned to the same manufacturer due to our good experience with their machines over the years, its strong offering in automation involving its own and third-party solutions, and the excellent back-up provided by the sales agent Kingsbury.”
For further information www.kingsburyuk.com