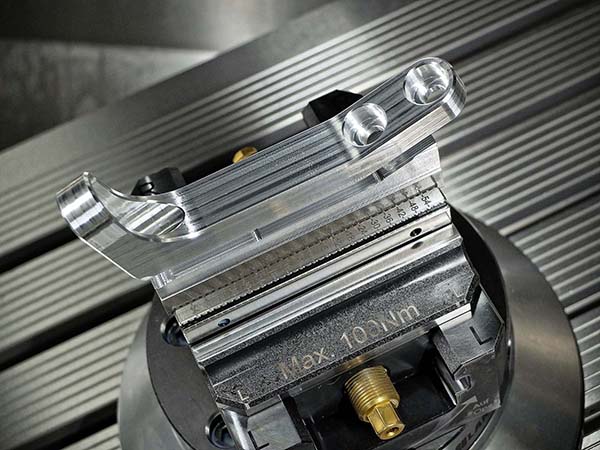 Subcontractor Alitech Precision, which specialises in supplying motorsport and automotive customers from its Silverstone facility, installed its first five-axis vertical machining centre in March 2017. This machine was the company’s fifth VMC, and was joined in December last year by another five-axis machine from a different source, the German manufacturer Hermle, which supplied a C400 through sole sales and service agent, Kingsbury. 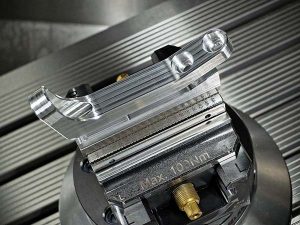 Most subcontractors progressing from three/four-axis machining to fully interpolative five-axis cycles gain significant benefits from adopting the technology. Apart from raising the complexity of freeform surfaces that can be profiled, key advantages are higher component accuracy and reduced cost of manufacture. They are achieved by reducing the number of set-ups needed, as a part can be positioned automatically with the two rotary CNC axes before being milled and drilled using the three linear axes.
The original five-axis machine, an entry-level model, delivered these advantages for owner and managing director Darren Cudd, who started Alitech in September 2014. He was delighted with the economical process routes he was able to establish, but there were two snags.
One was a shortage of capacity, despite operating 24/5 and at weekends, as Alitech had been doubling turnover every year since its formation. Additionally, the company had progressed from producing mainly prototypes and limited batches of components to larger runs of typically 20-off complex parts, such as race car uprights, which meant that work was queueing for up to one month – an unacceptably long lead-time in this sector. 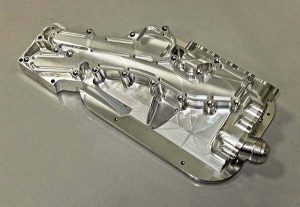 The other difficulty was that Formula One teams were asking for the subcontractor to supply an increasing number of aluminium moulds for making carbon fibre components. The first five-axis machine struggled to hold a tolerance better than ±50 µm, so as much as five hours of manual finishing and polishing were needed on every mould to remove witness marks left by milling cutter step-overs.
Cudd says: “Hand finishing has been reduced to about one hour per mould since the Hermle C400 took over production, as the temperature-compensated machine is able to hold ±4 µm. It saves a lot of manufacturing cost. Dimensional tolerance is fairly open at ±0.1 mm, which is easy to hold. However, with our other five-axis machine, the variation introduced by five hours of manual blending of steps between the final milling cutter passes risked using up the accuracy held during machining, sending the mould out of tolerance. On the Hermle the problem does not occur, as the step-overs are barely discernible, so there is little to polish out before achieving the surface finish that our customers require.”
After the race season, the Hermle will be deployed on the five-axis machining of precision components within its 850 x 700 x 500 mm working volume. One such part already produced is an inlet manifold for a track car that was machined in two operations on the C400 rather than the eight previously needed on a three-axis VMC, which took far longer and required expensive fixtures for setting the component at different angles. 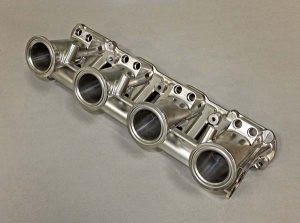 Another complex part cost-effectively manufactured on the latest five-axis machine was a billet dry sump that was designed and programmed in-house in SolidWorks and hyperMILL CAM software by head of CNC, Charlie Watts.
“The inherent accuracy of the Hermle allows us to easily hold much tighter tolerances than on the other five-axis machine,” says Watts. “For example, we recently interpolated 125 mm diameter bores to within ±6 µm, whereas previously we would not have been able to get close to this tolerance, and the accuracy achieved in the afternoon would have been different from that in the morning.”
He and Cudd had been researching the company’s next five-axis purchase for about a year before placing the order. They were looking for a large capacity and trunnion-type design, as they prefer the rigidity these machines offer over those employing a swivelling spindle head. Of the four options shortlisted, one was rejected due to its high price and insufficient X-axis travel, while another supplier provided questionable service. A third potential supplier, although offering an interesting horizontal-spindle solution, did not have a sufficiently large working envelope.
The fact that another member of Alitech’s staff had used a Hermle machine while employed by a Formula One team, and praised its performance, coupled with a visit to the manufacturer’s open house in Germany last April, clinched the decision to buy the C400. 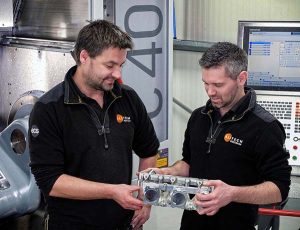 The C400 forms part of the new ‘Performance Line’ range, which has the same fundamental attributes as Hermle’s high-end models, such as a mineral cast bed and stainless steel cladding throughout the working area. A 50-position magazine was included to increase the HSK-A63 tool capacity to 88, along with an 18,000 rpm spindle to maximise aluminium machining efficiency, as this material is almost exclusive processed in the Silverstone factory.
For further information www.kingsburyuk.com