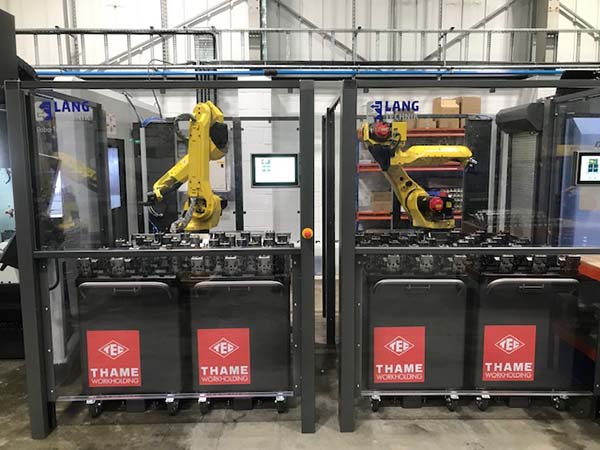 UK manufacturing lags behind the productivity performance of fellow G7 members and that of other major global economies. A lack of investment and shortage of skilled staff are widely considered to be major contributing factors to this lamentable situation. In addition to being regarded as an effective means of UK manufacturers achieving productivity improvements, the implementation of advanced automation technologies invariably helps solve skills shortages. 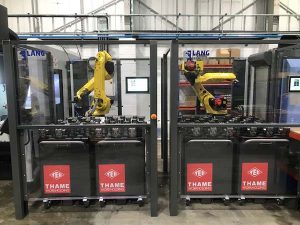 Hertford-based Qualiturn Products is a prime example of a forward-thinking business that has achieved world-class levels of productivity by embracing the use of automation systems and developing efficient new working practices.
Established in 1974, and now run by second-generation managing director, Nick Groom, Qualiturn Products says it has grown to become one of the UK’s leading suppliers of precision mill-turned components. In 1990, the company became one of the first subcontractors to operate its mill-turn machines in a ‘lights-out’ manner. The use of barfeed systems and other advanced production aids means that since that time, the business has operated 24 hours a day, seven days a week, 365 days a year, with only daytime staffing.
Prompted by the success of Qualiturn Products’ 24-7 production of precision turned components, in 2014 the company established Qualimill, a subcontract milling division that embraces similar, highly efficient, lights-out operating methods. Just as the application of innovative technologies facilitated a lights-out mill-turn manufacturing regime, the implementation of advanced automation aids, such as the Lang Robo-Trex system, supplied by Thame Workholding, has enabled Qualimill to operate milling machines ‘lights-out’, and helped the division to become a successful subcontract manufacturer of milled components.
To satisfy the rising demand for Qualimill’s services, the company recently moved into much larger premises and installed several additional production aids, the most recent of which is a second Robo-Trex robot automation system. The productivity gains made possible by the use of Qualimill’s first Lang Robo-Trex robot systems was a major factor in the decision to purchase the second system that now feeds a Doosan DVF 5000 machining centre. 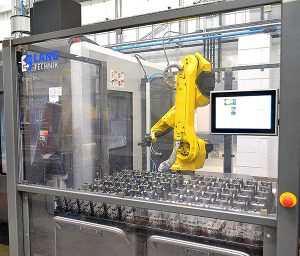 Qualimill’s two Lang Robo-Trex robot systems each use two trollies that act as mobile storage mediums. These trollies are loaded with multiple vices that hold workpieces which are ready to be loaded into the machine by the systems’ robots. The robots pick workpieces from the trollies, load them into the machine tools and, when they are fully machined, return them to the trollies. When filled with machined parts, each trolley is removed, and a replacement loaded with multiple workpieces ready to be machined is added.
Working unattended and fed by the Lang Robo-Trex systems, the company’s machining centres run throughout the day. Before the end of each manned shift, the Robo-Trex trollies are replenished with full consignments of workpieces, enabling each machining centre to run unmanned through the night.
Robo-Trex trollies are available in two sizes, the smaller version has a capacity of 30 vices to accommodate parts up to 120 x 120 x 100 mm, while the second, larger model has a capacity of 42 vices for parts up to 120 x 100 x 70 mm. The Robo-Trex system is able to handle four automation trolleys. Therefore, depending on part size, the available storage capacity increases to 120/168 vices.
The patented, edgewise mounting of the system’s vices ensures maximum space utilisation, while accessibility to the clamping devices allows workpieces to be exchanged, without removing the vice.
An intuitive, easy-to-operate touch panel enables straightforward control of the automated system and, as external access to the trolley is possible, production remains seamless because machining cycles do not need to be interrupted. Control of the zero-point clamping system can be performed either pneumatically through the machine tool, or mechanically via the system’s robot.
“Increasing demand from our mill-turn customers motivated the launch of our Qualimill division,” says Groom. “To ensure that we were able to replicate the success of our Qualiturn operation, when setting-up the new division we put into operation advanced automation systems – where possible – and applied similar efficient working practices to those used in our mill-turn operations.
“Soon after the formation of Qualimill, in an effort to gain maximum milling efficiencies, we looked for an advanced technology that would allow lights-out running of an existing CNC milling machine,” he adds. “We found the answer in the Lang Robo-Trex automation system from Thame Workholding. Having been impressed by the performance of our fist Lang Robo-Trex robot system, to help satisfy ever rising requests for our milling work, we recently purchased a second system.
“Our decision to launch Qualimill and employ highly-efficient production technologies has been validated by the division’s success. Our new Lang Robo-Trex automation system now feeds a recently purchased Doosan DVF 5000 machining centre and further extends our lights-out production capabilities. 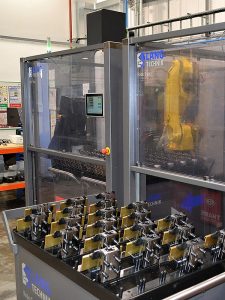 “By releasing the full, latent productive potential of the machine tools they serve, our two automatic handling systems release skilled staff for more technicality demanding work. In addition, our Lang Robo-Trex automation systems are helping us to accelerate production throughput and reduce our lead times. They also enable the generation of cost-effective quotes and help us to attract further business.”
Thame Workholding’s sales manager Gareth Barnett adds: “As well as providing industry with a range of cost-effective, standard work-holding systems from several of the world’s leading manufacturers, we also design and manufacture bespoke solutions in-house. Our experience and expertise in all aspects of work holding allows our staff to fully understand customer needs, then to provide optimum, cost-effective solutions.
“Our grasp of Qualimill’s brief, relating to the division’s quest for efficient lights-out working, enabled us to recommend the Robo-Trex automatic handling system with confidence,” he adds. “Now that the company’s first system has delivered on all of the promises we made, we were delighted to receive an order for a second system.”
For further information www.thameworkholding.com