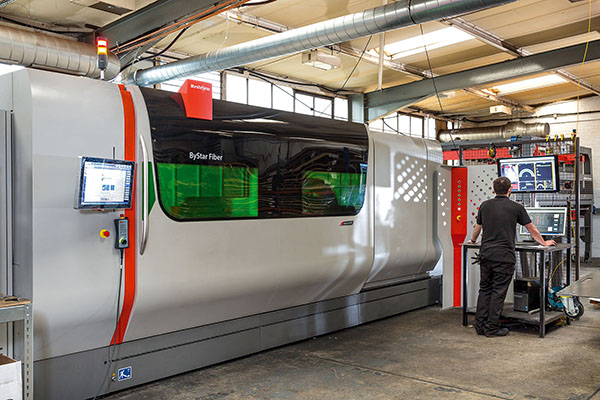 After completing his apprenticeship and gaining an HND in mechanical engineering, as well as an NVQ Level 3 in AutoCad, Iain Summerfield found himself at a sheet-metal subcontractor in 2001 sweeping the floor and loading material on to four Bystronic CO2 flat-bed laser-cutting machines. Within the first three months he had reorganised the firm’s production processes, started programming and operating the lasers, and took a course in the nesting, programming and simulation software, BySoft. 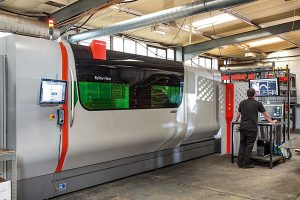 Seven years later, in mid-2008, he decided to use a small inheritance, re-mortgage his house and join forces with co-director Paul King to set up their own company, Laser 24, to provide similar subcontract services. In a little over a decade, the subcontractor has grown to employ 26 staff and has added CNC bending to its capacity.
Due to the reliability of the Bystronic machines at his previous company and, in particular, the user-friendliness of the software, Laser 24’s first purchase was a second-hand BySprint 1.8 kW CO2 3015 (3 x 1.5 m) laser-cutting machine, which ran 24-7 in a 3500 sq ft factory unit in Wickford, Essex. At the time, one of the early contracts was the production of 5000 decorative snowflakes from 0.5 mm aluminium sheet for a Christmas display at Harrods department store in London.
Various permutations of more powerful CO2 laser-cutting machines were operational on the shop floor over the next seven years. However, it had become apparent that for cutting stainless steel and aluminium, it was impossible to be competitive with a CO2 laser as fibre lasers were so efficient at processing these reflective materials. Copper and its alloys, which previously could not have been considered at all, can additionally be cut as there are no conventional optics to be damaged by back reflections.
So in 2015, one of the CO2 machines was exchanged for Laser 24’s first fibre laser cutting machine, a Bystronic 3 kW ByStar Fiber 3015. The machine was automated with a ByTrans Extended sheet-handling system purchased two years earlier with a previous machine, shortly after the subcontractor moved into new premises near the original unit and almost double its size.
The effectiveness of fibre laser cutting was immediately apparent, and the wider range of materials that could be processed resulted in new work being won. Fibre technology had matured by then into one that was supplanting CO2 in almost all application areas, and was clearly the future. By mid-2018, the subcontractor had attached a 10 kW ByStar Fiber to the ByTrans Extended, which was joined by a second identical production cell six months later. Laser 24 is the only company in the south of England to operate a pair of 10 kW sheet-metal cutting centres. 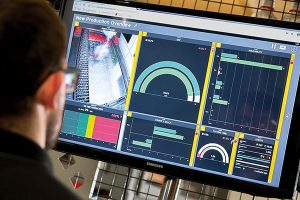 Summerfield says: “With our latest machines we opted for the PowerCut feature in the BySoft 7 control software, as it produces a clean cut edge on thicker, even reflective materials up to 30 mm. It is also economical, as it more than halves the volume of assist gas consumed.
“The 10 kW fibre laser is twice as fast as our previous fibre machine and over three times more productive than our old CO2 equipment,” he continues. “We now cut 10 mm mild steel sheet at around 5 m/min on the 10 kW machine, whereas on our CO2 machines, the best we could achieve in the same material was 1.5 m/min.”
Summerfield adds that the company mainly uses nitrogen as the assist gas, rather than oxygen, as it results in an un-oxidised edge that does not need to be finished before it is painted or powder coated.
A further advantage of having a 10 kW fibre laser source is that there is sufficient power to use air rather than oxygen as the assist gas for certain jobs. This strategy results in an edge quality that is indistinguishable from oxygen when cutting material up to 1.5 mm thick, and is still acceptable for thicknesses up to 3 mm. In fact, Laser 24 is currently considering air cutting, which avoids the cost of using bottled gas, as an economical alternative to plasma cutting for applications that do not require top-quality edge finish. Trials are currently being performed.
A further significant benefit of the higher power laser is its ability to guarantee the edge quality on both sides of a sheet when cutting coated material. Normally, due to the coating on the underside, a burr results that needs to be removed by hand, but the 10 kW fibre source eliminates this problem and leaves a clean edge.
Coupled with the use of ByTrans automation, which avoids the risk of manual handling damage, parts delivered to customers require no buffing or cleaning. A case in point was the supply of mirror polished stainless steel frames that supported glass displays and were visible from both sides at this year’s Chelsea Flower Show.
Maximum cutting capacities of the 10 kW fibre laser are 25 mm mild steel, 30 mm stainless steel and aluminium, 15 mm brass, and 12 mm copper. Summerfield makes the point that the ability to tackle thicker plate overlaps with the use of waterjet cutting, compared with which laser processing is half the cost. Unless a heat-affected zone at the component edge created by the laser (but not the waterjet) is a problem, for the aforementioned gauges of material, the 10 kW Bystronic ByStar Fiber is the obvious choice.
At the end of 2017, Steve Westgate was employed by Laser 24 as operations manager to oversee a gradual transition to a paperless working environment, which included the replacement of a wall-mounted T-card planner. Two additional software modules within BySoft 7 that are accelerating this process are ‘Plant Manager’ and ‘ByCockpit’.
Plant Manager is an analysis, planning and monitoring module that automatically assesses machine and job data so that parts can be cut and bent more quickly, at a lower cost and without errors. As manual data input is no longer necessary, processes run more reliably. The software provides comprehensive statistical data on production efficiency, which Westgate says exceeds 90% OEE at Laser 24. 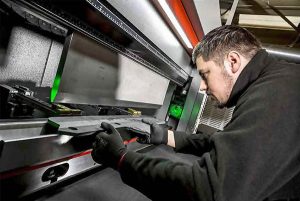 Within the Plant Manager suite, ‘Parts Removal’ software is especially popular with the production staff. Among other abilities, Parts Removal allows the suction cups on the ByTrans to be positioned such that individual components within a sheet can be picked up and stacked on to pallets, with the skeleton also being removed, all of which reduces handling time and cost.
ByCockpit is a more recent introduction that monitors, in real time, all processes taking place within Bystronic laser-cutting machines and press brakes. Running on a laptop, smartphone or tablet, the software collects data without manual intervention, evaluates it and generates status reports while machines are actually producing parts, allowing production output to be continually optimised. Westgate says that the app allows all KPIs (key performance indicators) to be managed within the Wickford facility.
For many years, customers had been asking for laser-cut parts to be bent, a service that was fulfilled by putting the work out to other subcontractors. This situation changed in September last year with the arrival of Laser 24’s first press brake, an 80-tonne, 1.5-m capacity Bystronic Xpert 80. The press brake is of a design that allows a robot to be attached to the front so that loading and unloading can be automated. Such a retrofit is being seriously considered, since as many as half of current customers have expressed interest in having their parts bent.
A particular strength of BySoft 7 is that it is used to program not only laser-cutting machines, but also press brakes, so only a single program is needed for producing a bent part from a flat sheet. Having one program speeds the end-to-end manufacturing process and virtually eliminates the possibility of mistakes, so even the first-off part is right.
Summerfield states: “The Xpert press brake is the fastest and most advanced on the market. Its high productivity allows us to add value to parts quickly and undercut the competition.
“BySoft does the majority of the thinking for you and has taken the trial-and-error out of press braking,” he adds. “An internal database allows bend allowance, spring-back angle and punch stroke to be calculated automatically according to the type and thickness of material. High accuracies are routinely achieved, typically ± 0.25°.”
Laser 24’s customers are to be found in a wide range of sectors, including automotive, aerospace, marine, yellow goods, construction, retail, catering, signmaking and general engineering. Due to a high level of interest in the provision of additional services, the company is considering expanding the extent of its in-house processing capability to include fabrication and painting, and perhaps additional machining operations such as milling, tapping and countersinking.
For further information www.bystronic.co.uk