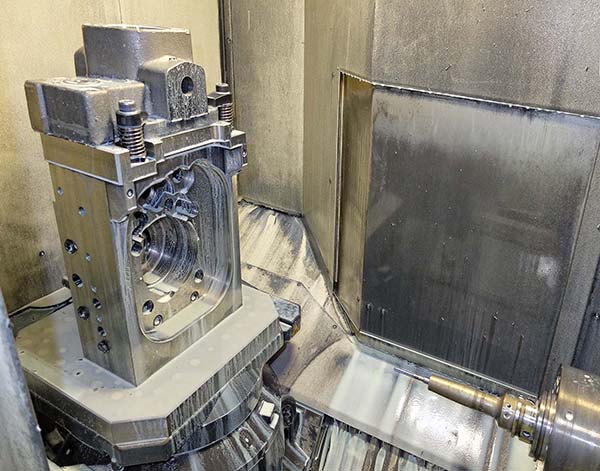 In its 25th anniversary year, the Plymouth plant of hydraulic motor, pump and valve manufacturer Kawasaki Precision Machinery has seen a far-reaching reorganisation of its K3VL axial piston pump machine shop. This initiative follows the purchase in October 2018 of a pair of twin-pallet, horizontal-spindle machining centres (HMCs) from Heller Machine Tools to replace two ageing, double-pallet models on which it was becoming difficult to hold tolerance. 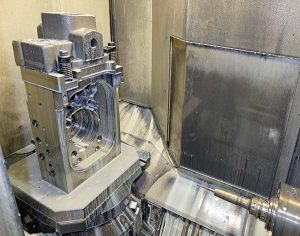 One of the new Heller H2000 HMCs, which are manufactured at the supplier’s factory in Redditch, is devoted to machining pump cases, while the other HMC mills and drills valve covers. The components are produced from grey iron castings that have had their bores pre-turned on a lathe in preparation for two-operation prismatic machining. Around 20,000 of each component are produced per year.
Production engineer Mark Pellow says: “In the case of the valve cover, the machining time of 50 minutes plus 10 minutes load/unload on the former production centre has been replaced by a 32-minute cycle on an H2000. For the pump case, the former machining time was 48 minutes plus 10 minutes, for handling, while the current cycle takes just 30 minutes.
He adds: “As set-up is carried out on the other pallet during machining, the next component is presented to the spindle within seconds by automatic pallet change (APC), so productivity has been nearly doubled for both components.”
The two process routes have been changed to enable such a significant increase in output. Parts are still loaded two at a time on a tombstone for op 1 and op 2 machining. One difference now is that fixtures have been built into a suite of tombstones to accept the castings directly, rather than first having to mount the parts on to work-holding plates. The latter double-handling procedure used to eat into much of the spindle uptime on the previous machines. 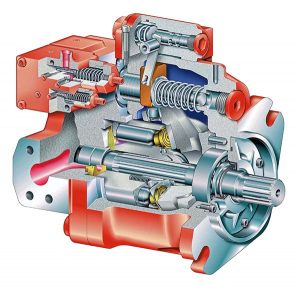 There is a second, even more important difference, however. When nearby Morris Engineering produced the work-holding solutions for Kawasaki, it arranged the two fixtures so that one is on a tombstone face and the other is mounted across the top, improving tool access. The result is that any given tool can machine more features throughout the whole cycle, the program no longer being split into two, so fewer tool changes are needed, leading to less idle time. Tool exchange itself is also faster at 2.8 seconds chip-to-chip, as are rapid traverses at up to 90 m/min around the 630 mm working cube.
In-cut times are shorter as well on the Heller horizontal machining centres due to the faster cutting feed rates and spindle speeds. This cutting data is coupled to the use of Seco’s latest insert-based and solid-carbide tooling having long service life, reducing the need for worn tool replacement. A 6.2 mm diameter solid-carbide drill now produces holes to depth at a fast feed rate, for example, compared with the previous need for a high-speed-steel drill to peck in 5 mm increments up to 20 times at a slower infeed. The use of carbide form drills from UTT also speeds hole production.
Further savings within the machining cycles derive from better probing of more features for establishing workpiece position, which allows most fixed datums to be live, minimising operator adjustments relative to them.
Not only is productivity almost doubled by the new processes, but accuracy of machining is also improved, allowing tolerances to be held easily. For instance, 50 µm valve cover concentricity, 20 µm servo piston concentricity and 0.2 mm dimensional accuracy on bolt holes are held to support a process capability of at least Cpk 1.33. Previously, some tolerances when checked on the Mitutoyo shop-floor CMM were close to their limits and engineering intervention was frequently needed.
Currently, production for one pump frame size is carried out on the Heller H2000s, but a further two sizes will be phased in over the coming months, entailing more than 30 part numbers encompassing all variants.
As to Kawasaki’s choice of Heller HMCs for this latest project, bearing in mind there are already two other brands of horizontal-spindle machine on the shop floor and a fourth was also considered, Pellow says: “As is often the case with machine tool purchases, we constructed a checklist of machine attributes from speeds and feeds, through health and safety features, to price. 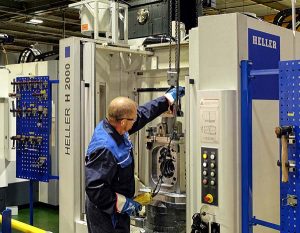 “In this appraisal, 19 items were listed on a spreadsheet and Heller’s overall score came out on top,” he adds. “The fact that we use four other Heller HMCs that are about a dozen years old yet are still reliably producing a valve block and two cases for our KV3 pump, also helped the decision-making process.”
For further information www.heller.biz