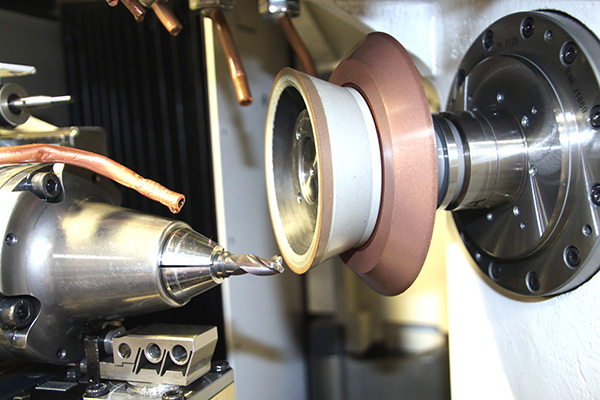 The transition to being a member of a global group has seen Apex Cutting Tools expand its reach into the aerospace market, but with automotive tier one suppliers, as well as GM and Chrysler nearby, the automotive industry remains a core focus. The growth of the company located near Niagara Falls now sees it undertake the processing of over 1000 re-grinds a week for a single customer. With an output of more than 10,000 carbide and PCD tools a month, the company also manufactures hundreds of steel tool bodies with indexable inserts in the same timeframe. 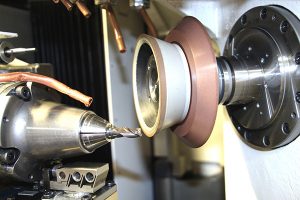 Apex Cutting Tools produces more than 2000 new PCD and solid carbide tools each month, with more than 8000 tools on a repeat cycle of re-grind, re-coat and re-supply to clients. This total output has more than doubled in the past 10 years. Notably, each and every tool is a special, which makes production at Apex Cutting Tools far removed from the volume production market. The company operates two shifts, and if machines can be loaded with a batch of tools for overnight production at the end of the second shift, they will be. This strategy sees machines like the Vollmer Vgrind 160 running up to 24 hours a day.
CNC Grinding Department supervisor at Apex Cutting Tools, Stephan Rodrigue, says: “The breakdown of our production is relatively equal between PCD and indexable tools, with solid carbide being the majority of production. Our volumes are generally in the range of 5 to 50 tools, with some runs occasionally reaching a few hundred. We have one customer that comes in on a Friday with a 1000 tools that have to be re-ground by the following Monday.”
The company has a series of manually loaded CNC tool grinders, which are now reaching the end of their service life, something likely to be expedited by poor machine support and the arrival of automated machines like the Vollmer Vgrind 160.
Referring to the acquisition of the Vollmer Vgrind 160 just over two years ago, Rodrigue says: “The company invested heavily in DMG Mori and Mazak machine tools for producing tool bodies, Zoller Genius tool measuring machines and a range of CNC tool and cutter grinders. We were invited to look at the Vollmer Vgrind 160 machine but, as it was going to be our first Vollmer, we were somewhat apprehensive. Our opinion changed as soon as we looked closer. Now it’s here we’re thoroughly impressed and already looking at a Vollmer erosion machine.” 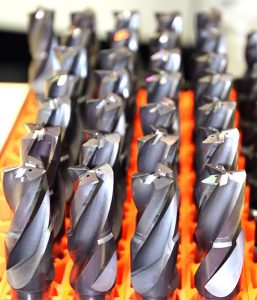 One of the key features that drew Apex Cutting Tools to the Vollmer Vgrind 160 was the CNC control platform, as Rodrigue explains: “The Vollmer has the Numroto Plus CNC software platform, which is a different control system to our older tool grinding machines. Numroto is now on most of our new machine acquisitions and the Numroto Plus platform is a must for us going forward. This is because it allows any program to be swapped between any of our new machines, regardless of brand.”
The thousands of solid carbide tools are produced or re-ground on four automated CNC grinding machines and three ageing manually loaded machines.
“As we produce tools with shank diameters from 3 up to 20 mm in 1 mm increments on the Vollmer, they were kind enough to give us the drawings to produce our own collection of auto-load pallets in our own machine shop,” says Rodrigue. “As standard, the HP160 pallet magazine can hold 272 tools with 3 mm shanks, while for larger tools with 20 mm shanks, we can hold 54 tools. We also have a special collet in the spindle for doing tool shanks up to 25 mm and the machine has a steady rest to support the production of drills over 200 mm long. The HP160 with its two-pallet system works fantastically well, and the tool capacity gives us long periods of automated production.”
Of critical importance to the prolonged periods of unmanned running is the auto-change six-wheel pack that is stored at the rear of the machine. Automatically, the wheels are measured in-cycle with a probe, dressed and/or changed depending upon the geometry of each tool. So, regardless of whether the HP160 is loaded with carbide blanks or tools for re-grinding, the Vgrind will undertake complete fluting, geometry generation or re-grinding to the exact program specifications.
Comparing tool production cycle times to alternate machines in operation at Apex Cutting Tools, Rodrigue says: “This is a tough question as all our machines have different capacities and power levels, but in most cases the Vollmer gives us cycle time gains over our other machines. This is largely due to the vertically aligned spindle configuration on the Vgrind. For example, we will rough grind the flutes on the lower spindle and then do the finishing cycle on the top spindle, which instantly removes the constant wheel changes that are common on our other machines.
“The finishing wheel will undertake micron precision grinding with outstanding surface finishes whereas the rough grinding can really rip the material off,” he continues. “We are doing a 24 mm diameter tool at present with a 12 mm core diameter and the Vgrind will grind the flutes in a single pass. Compared with most of our other machines, this stock removal is well above their rates. The Vgrind is at least 30% faster at roughing than some of our older machines. This is impressive considering the machine has belt driven spindles as opposed to the direct drive spindles on newer Vollmer machines.” 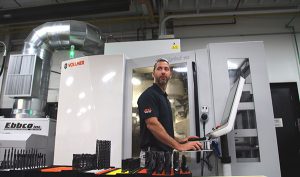 Despite the Vollmer Vgrind 160 being significantly faster than alternate machines, Rodrigue says it is difficult to draw parallels between the various grinding centres at Apex Cutting Tools.
“We have manually loaded grinding machines, machines dedicated to small tools and others dedicated to hob grinding, so like-for-like comparisons are difficult. What we have noted is the kinematic advantages of the vertically aligned twin spindles that pivot around the C axis. Firstly, having two wheels in the work envelope reduces wheel changes to improve processing speed. Secondly, the extremely robust grinding wheel column maximises rigidity and vibration damping. It is this rigidity that contributes to massively reducing flute roughing times. The closest comparative machine would be a very high-end machine that cost hundreds of thousands of dollars more than the Vgrind.
“An extra rail at the top of the C axis gives the axis support from the top and bottom and the whole thing can swing around and grind from two positions,” he adds. “The solidity of that whole system and the spindles Vollmer uses, that’s just the biggest factor. There is no comparing that. Some of our machines have a suspended spindle, so you lose precision, surface finish and the rigidity depends fully on the spindle. Here, you have a massive structure that comes in and really takes out the material.”
For further information www.vollmer-group.com