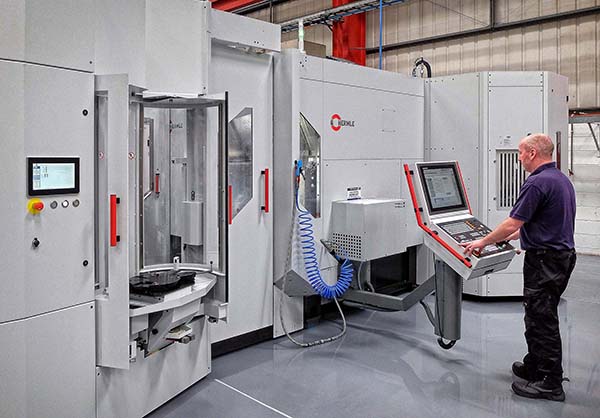 The first machining centre built by German manufacturer Hermle to be installed at a Hyde Group company has been operating around the clock since April this year at Stoneswood Precision Components in Dukinfield. The C400 five-axis vertical machining centre, supplied by sole agent Kingsbury, has been automated with the machine manufacturer’s HS Flex pallet storage and retrieval system to enable unattended subcontract production overnight and at weekends. 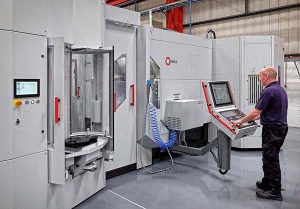 Stoneswood Precision’s managing director Charles Day says: “We looked at four options before deciding to buy the Hermle cell. Its major differentiator is the ability to stop automatic production quickly and use the machine in manual mode to manufacture a one-off part. The other solutions we looked at could not achieve that easily.
“The flexibility it provides is already proving useful, as it is allowing us to machine fixtures during the day and simultaneously set up the HS Flex for lights-out running overnight,” he adds, before stating that “the cell’s connectivity also fits well within the Industry 4.0 environment that we are creating in our factory”.
Stoneswood Precision’s current facility was set up in 2004 to produce 450 different aluminium and titanium parts for a military aircraft, involving the machining of mainly wing details. Already a user of several multi-pallet production systems based on horizontal machining centres, the subcontractor needed an additional system to fulfil a different contract for the manufacture of aluminium control boxes.
Initially, an older five-axis VMC with a B-axis spindle was employed to produce the suite of 48 bodies, sides and lids for the control-box variants, which range in area from 75 x 150 mm to 300 x 300 mm, and from 5 to 20 mm deep. The components are smaller and more complex than most of the predominantly aerospace parts produced at the Dukinfield facility, and the HMCs are too large to machine them efficiently. 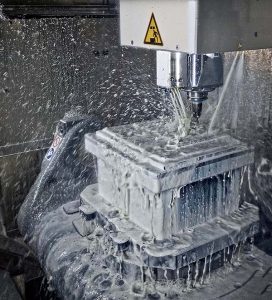 Originally, the process route required the use of a coolant-driven, right-angle attachment for drilling holes in the sides of components to avoid further set ups. The tool, while in many ways fit for purpose, could not hold the positional tolerances required, down to 100 µm true position. Drilling was not sufficiently repeatable over a batch of components and therefore a new engineering solution was sought, resulting in the installation of the new production cell based on the trunnion-type Hermle C400 five-axis machine.
Says Day: “Apart from the control-box work dictating the use of a five-axis VMC, there are parts of other aerospace contracts that lend themselves to a vertical-spindle production platform, and many new enquiries we receive also require such capacity. So the choice of a second VMC, particularly with automation, made business sense.
“I had never heard of the Hermle brand but Paul Mellor, technical director of the Hyde Aero Products division of which we are a member, was familiar with the manufacturer,” he continues. “Some of our staff travelled to a user of a smaller HS Flex system in the northeast and came back with very positive reports, including from the shop floor, so we decided to place the order.
“Luckily the C 400 was in stock at Kingsbury, so it was available quickly to solve a looming production bottleneck, whereas other potential suppliers were quoting lead-times of up to a year.”
Day says he was impressed that the machine was quickly into service after it arrived on site, with final commissioning within nine days, after which the machine started producing components straight away. This speed was down to the prior provision from the supplier of a CAD model of the C400, which allowed early 3+2 axis programming of parts in CATIA, cycle simulations in Vericut, and the design and production of fixtures. The latter exercise was helped even further by Kingsbury’s delivery to Dukinfield of an actual machine pallet.
Advance preparations made the on-site training provided by a Kingsbury engineer over a period of five days more productive than had the subcontractor’s staff still been at the start of developing the processes. 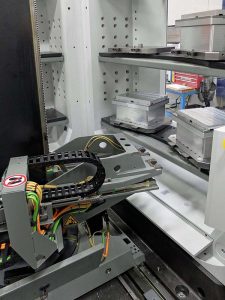 Another facet of the C400 cell that Day appreciates is programmable coolant pressure between 0 and 80 bar, providing engineering flexibility that includes the potential use of the coolant-driven drilling head in future projects.
The specification of the Hermle cell includes an 18,000 rpm/20 kW spindle, extended tool capacity from the standard 38 pockets by the addition of an 88-position magazine for HSK-A63 tools with breakage monitoring and measuring included, a Heidenhain TNC 640 control, 850 x 700 x 500 mm working area, +91/-139° trunnion swivel, and 500 x 400 mm pallet size and capacity for 12 of them on two levels in the HS Flex store. Of note, the HS Flex store is served by a three-axis pallet handling unit with rotary, lift and linear motions.
The store is controlled and managed by Hermle’s proprietary Automation Control System, which enables smart order management via a touch panel. In addition, the system is currently being interlinked with an MES that was recently installed in Dukinfield by Forcam, which is compatible with Stoneswood Precision’s ERP software. The system allows production orders to be sent directly to all machines for improved job sequencing, leading to optimised production output. This provision of enhanced data, including of machine utilisation, is taking the subcontractor’s operation further along the road of Industry 4.0. 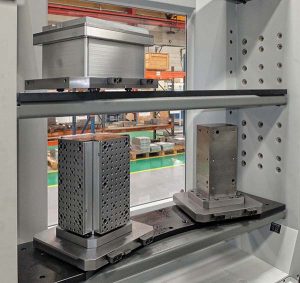 Currently, the Hermle C400 HS Flex is devoted to the control-box contract, which entails supplying 300 assembled housings annually. All components are machined either individually on a pallet, or four at a time on a tombstone, depending on size, from solid aluminium billet in two operations involving milling, drilling and thread milling cycles lasting up to two hours per side. The true position of the holes is now well within tolerance.
For further information www.kingsburyuk.com