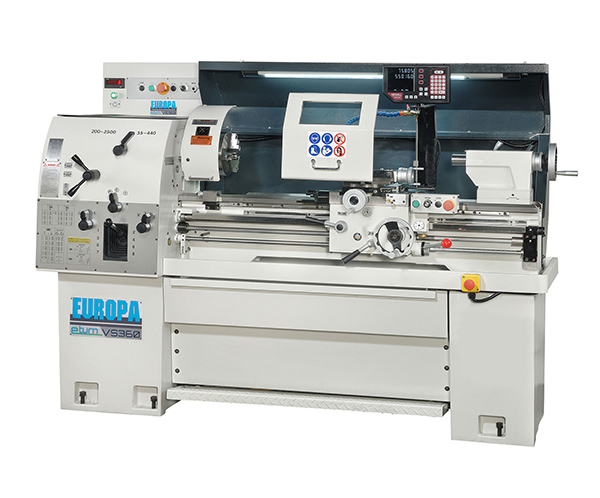 The Europa eturn VS series of gap-bed centre lathes is being released into the UK market by RK International Machine Tools. Featuring eturn Energy Management Technology (EEMT), eturn VS lathes help to reduce energy consumption, particularly when the machine is stood idle. 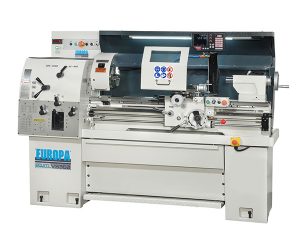 The system constantly monitors the machine and, if a period of inaction is detected, puts the lathe into sleep mode, switching off all unnecessary power consumption. A simple push of a button brings the lathe back to full operational activity.
Along with its environmental advantages, the Europa eturn range also offers a high specification, with an electronic variable-speed spindle featuring Schneider frequency inverter. Transmission is via a Norton-type gearbox that delivers constant power and torque. Each machine in the range is also equipped with a Newall NMS300 two-axis digital readout for ease-of-use, while Bison has been selected as the work-holding partner, allowing a three-jaw scroll and four-jaw independent chuck to be supplied as standard equipment.
There are eight machines in the range, starting with the compact Europa eturn VS330 with a 330 mm swing over bed (510 mm in the gap), and either 750 or 1000 mm between centres. Spindle speed is totally variable between 40 and 2500 rpm, with two gear ranges to allow constant torque. Longitudinal feed rates are between 0.02 and 1.04 mm/rev.
The other machines in the Europe eturn range are the VS360, VS390, VS460, VS510, VS560, VS660 and VS760, with the number designating the swing over bed.
The larger machines in the range feature a three-range gearbox with maximum spindle speeds from 2500 rpm down to 1400 rpm on the largest model. Between-centre distances across the series are from 750 mm through to 6000 mm.
For further information www.rk-int.com