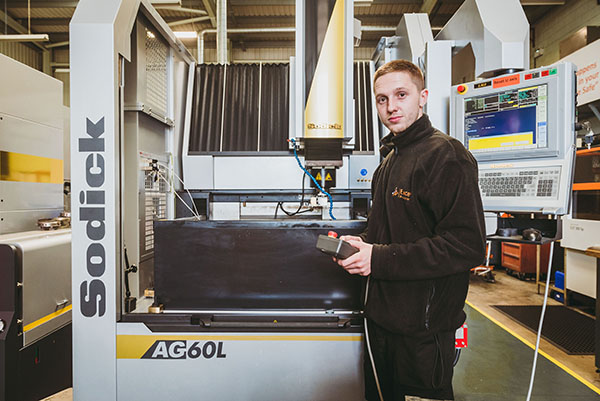 Excel Precision Group has enhanced its wire and spark erosion capabilities by acquiring two new Sodick machines from Sodi-Tech EDM. Installed at the company’s Gloucester facility, which has AS9100 rev D and NADCAP AC7116/3 Rev B approval in place for both spark and wire erosion, the arrival of the Sodick ALC600G wire EDM and AG60L die-sink EDM will underpin a number of important contracts across both the civil and military aerospace markets. 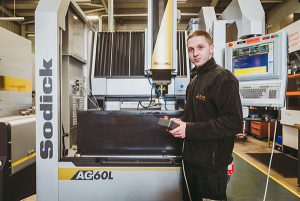 Established in 1978, Excel Precision Group operates from two modern facilities in Gloucester and Leeds, which together house over 30 CNC wire and spark erosion machines. This capacity, along with its accreditations, make Excel one of the leading EDM subcontract operations in the UK, with particular emphasis on aerospace and defence.
“Few EDM subcontractors have both AS9100 and NADCAP approval,” states Steve Batt, operations director at the Gloucester facility. “This level of process control allows us to serve an extensive number of aerospace and defence customers. In addition, we currently hold company approvals from BAE Systems, Rolls-Royce, Goodrich, Safran Landing Systems, Dowty Propellers, Messier Dowty, MT Satellite, GE Aviation, Moog Aircraft Group, UTC Aerospace Systems, Mettis Aerospace and Triumph Actuation Systems.”
Along with the need to replace older machines, part of the reason behind the company’s investment in Sodick technology was due to the imminent ramp-up of an existing defence contract that is currently scheduled to run until 2022. An NDA has been signed, so details are scant, but the parts involve the intricate wire erosion of titanium stock.
“We looked at both Sodick and our existing supplier of EDM machines, but the test cuts provided by Sodi-Tech EDM were simply better,” says Batt. “In particular, the surface finish produced by the AG60L spark eroder really caught our attention. Due to the presence of debris, some machines struggle to replicate the surface finish achieved on the sides of parts, on the bottom face. However, this proved no such issue for the AG60L.” 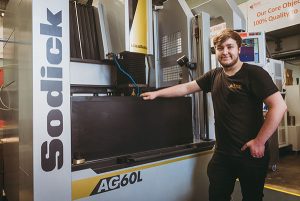 Excel Precision’s AG60L has been set to work producing a variety of aerospace parts, including stainless steel actuator components. In total, the aerospace sector commands about 40% of the machine’s time. The other Sodick machine, the ALC600G wire EDM, has around 50% of its output sent to aerospace customers, including the titanium defence part.
“Compared with our old machines and process, using the ALC600G has transformed our operation for this component,” says Batt. “For a start, we previously needed two machines, whereas now the part is completed in its entirety on the ALC600G. Also, our old machine would only achieve a 90% pass rate on an angled face with a
5 µm tolerance. With the Sodick machine, the pass rate is 100%. That step-up in quality makes a real difference on high value-added parts such as these.”
Excel Precision is currently tasked with producing 200 of the titanium defence parts every month, although this figure will shortly rise to 600. Using the ALC600G, the company can produce around 24 per day. However, with work for other sectors, both Sodick machines run 24 hours a day, four days a week, with long cycle-time jobs loaded at the weekends. Aside from aerospace and defence, the company serves further high-end industries such as motorsport, nuclear, oil and gas, and medical.
“We’ve not had Sodick machines at Excel since before 1995, but we’re very pleased to make the switch back,” says Batt. “The technology has moved on considerably and we cannot fault the machines or the team at Sodi-Tech EDM, who have been very supportive since installation in early 2019. Through our own mistake, we once accidently set off the fire extinguisher on the AG60L, but the response was excellent and we were back up and running the next day.”
Excel Precision actually began life in Leeds, but started the Gloucester operation seven years ago through acquisition. The machines at Gloucester were around 20 years old and the company has since been progressing its way through a steady replacement programme. 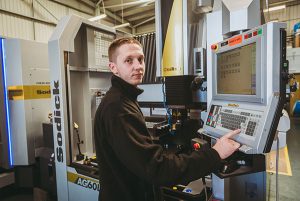 “One thing we’ve noticed is the compact nature of the Sodick machines,” says Batt. “We were able to fit both Sodicks into the space previously taken up by one older EDM. Also, while we didn’t buy the machines for speed, it’s difficult not to notice the gains we’ve achieved. The titanium defence part previously had a cycle time of 65 minutes, but it’s completed in just 35 minutes on the ALC600G wire EDM, a 46% improvement. As for the AG60L die-sink machine, the results we get, particularly on deep cavities, is like nothing we’ve seen before. We have also reduced our electrode consumption dramatically; we now complete many jobs using just one electrode.”
Good growth over the past two years has seen Excel Precision Group hit an annual turnover of £2m, and more growth is expected moving forwards.
“There are many factors that set us apart from competitors, not least the capacity we offer and the accreditations we hold,” concludes Batt. “In addition, we believe the level of work and service we provide is second-to-none. It’s all about quality, on-time delivery and customer communications, all backed up by investing in the latest technologies.”
For further information www.sodick.org