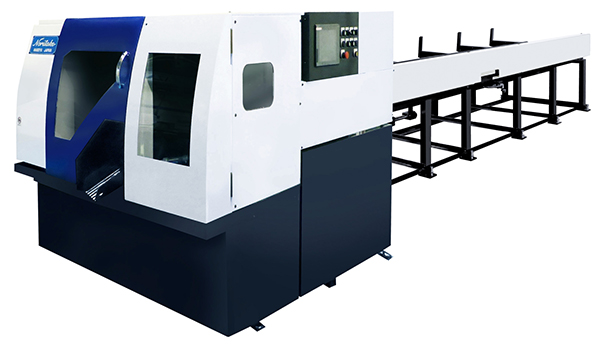 Dyfed Steels has recently invested in its second Noritake saw. The NCS-7/80 is the latest high-speed circular sawing machine from Noritake, which is represented in the UK by Sawcraft. Boasting the ability to increase cutting capacity by more than three times that of conventional models on the market, the NCS-7/80offers an average speed for cutting S45Csteel bar (45mm diameter)of 1.8 seconds.

Other key features of this model are an increase in the feed stroke length from 600to 750mm, improving the overall speed of feeding longer length material. The overall size of the machine has also been reduced when compared with similar models, making it one of the most space efficient saws on the market, says the company.

Sawcraft, which also promotes FMB and Cosen bandsaws in the UK, recently exhibited at the Saw Expo 2018 show in Augsbury, Germany. The show is the first of its kind solely dedicated to the sawing industry, and built on success earlier this year at MACH 2018, a show that Sawcraft says brought in record sales. All of the models on display at MACH were sold off the stand.
For further information www.sawcraft.co.uk