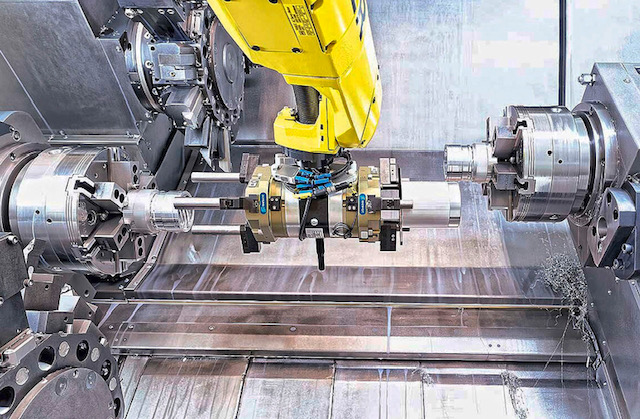 German subcontractor Euler Feinmechanik, based in Schöffengrund near Frankfurt, has invested in three robotic machine-tending systems from Halter to automate the loading and unloading of DMG Mori lathes. The Halter range of LoadAssistant robotic machine-tending equipment is available in the UK from 1st Machine Tool Accessories.

Established more than 60 years ago and with around 75 employees, Euler Feinmechanik machines complex turned and milled parts such as optical bearing mounts, components for camera lenses, rifle scopes for hunting and the military, medical and aerospace parts, and housings and stators for vacuum pumps. Materials machined are mainly aluminium, brass, stainless steel and various plastics, such as PEEK, acetal and PTFE.

Managing director Leonard Euler says: “Automation and robotisation are important aspects of our continuous improvement. We’re constantly thinking about whether we can optimise individual processes so that they interface even more smoothly.”

In 2016, Euler Feinmechanik bought a new CTX beta 800 4A CNC turn-mill centre from DMG Mori for the production of particularly complex components for vacuum equipment. Euler considered several brands of machine-tending equipment, as he was keen to find the best solution and make a future-proof choice on which the subcontractor could standardise.

“Halter is a specialist in this field and not only had a good automation solution, but also great references and a working demonstration that showed exactly what we wanted,” says Euler. “In the end, we opted for one of its Universal Premium 20 cells.”

A year after purchasing the first DMG Mori turning centre and retrofitting it with automated loading and unloading, Euler Feinmechanik bought two more lathes from the same source.
The two new machines were immediately equipped with Industry 4.0-compliant Halter loading robots identical to the first. Production on all three twin-spindle lathes can continue unattended for an average of half a shift, which maximises productivity and reduces labour costs.
For further information www.1mta.com