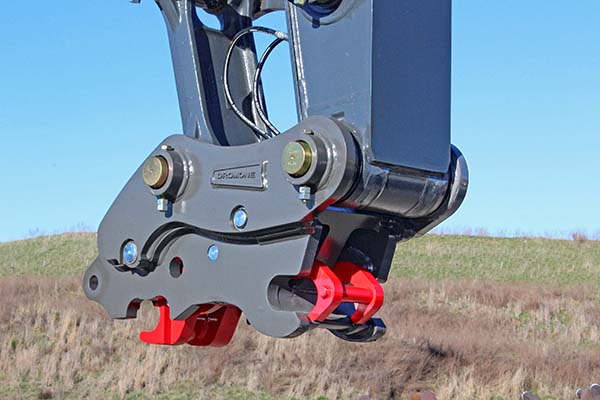 Irish manufacturing company Dromone Engineering, established in 1978 and now employing over 140 people, took a early decision early not to focus on providing a subcontract machining service, but instead to develop, manufacture and market its own product lines. The company has since become an industry leader in both, namely tractor pick-up hitches for the agricultural sector and excavator quick couplers for the construction sector. 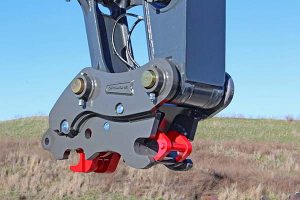 Dromone Engineering also resolved to keep its manufacturing base at company headquarters in Oldcastle, County Meath, and not move production to a low-wage country in Asia or elsewhere. It is an admirable objective that many firms achieve, as has Dromone Engineering, but in its case there was a particular obstacle. Despite having to provide top-quality products for applications in the industries served by the company, price negotiations do not come down to the nearest euro, but to the nearest cent.
From the start, the dilemma of manufacturing in a first-world country and trimming prices to two decimal places has continually focussed the minds of the firm’s directors and shaped their capital investments. For example, in 1999 Dromone Engineering was among the first to harness the productive power of laser cutting with the purchase of two 3.5 kW CO2 machines from Bystronic for profiling mild steel sheet up to 4 x 2 m.
In March 2019, these long-serving, reliable machines were replaced with more up-to-date technology in the form of a ByStar Fiber 4020 10 kW fibre laser cutting centre from the same supplier. The machine was delivered as a turnkey package, automated by the addition of a bespoke material handling system and tower store that accommodates up to 96 tonnes of material on 17 levels. 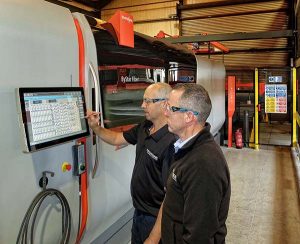 Dromone Engineering’s managing director William Egenton explains: “We export almost all of our products to 39 countries, either directly to blue-chip customers like JCB, Volvo, Massey Ferguson, Claas and Kubota, or via a worldwide distribution network servicing other OEMs, dealer networks and rental fleets. Customers in the west, in particular, appreciate the fact that we manufacture safety-critical products tailored to their specific needs in Ireland, and are impressed when they visit us. However, to make the operation financially viable we have to use a high level of automation.
“That is why we have invested €5m over the past five years in not only the latest laser cutting technology, but in three Panasonic robotic welding cells, four Mazak horizontal and vertical machining centres, and ERP software,” he adds.
Ollie Devine, maintenance and capex manager, says: “With some forms of automated production, such as welding, component quality is raised compared with manual techniques due to the better repeatability of the process. In the case of the Bystronic laser cutting centre, and other CNC machine tools for that matter, high quality is already built in. Automation brings more efficient delivery of raw material and unloading of finished work, minimising idle times and maximising efficiency.”
Cutting output at Oldcastle has seen a dramatic increase. The single machine fed from the sheet storage and retrieval tower, which was purpose-built to be exactly 5.54 m high so that it fitted beneath the factory roof, produces 30% more than both of the previous CO2 machines combined. This performance is not only down to the speed of fibre laser cutting, but also because previous sheet replenishment, although automatic, was relatively slow. This task was achieved using swing-arm Byloaders to transfer material from pallets to the respective CO2 machines and offload the laser-cut sheets. Overall, utilisation of the machines was only 50 to 60%. 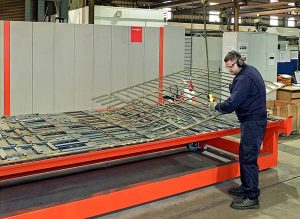 In contrast, the tower system has a pair of handling carriages. One transfers a laser-cut sheet to a twin offload table arrangement at the back of the ByStar Fiber, while the other more or less simultaneously picks up a new sheet from the store and loads it on to the machine’s shuttle table, from where it is immediately transported into the cutting area.
Little laser cutting time is lost and machine utilisation is around 90%. Labour cost is saved, as the operator is required to run the cell for only 2.3 shifts, rather than three, to achieve the required output, which currently satisfies the delivery of 11,000 tractor line products and 6000 construction line products per year.
The offload tables themselves are another good example of Bystronic’s bespoke approach to meeting customer requirements. To explain, the tables were purpose-built to be of different widths and heights, and to run on rails set in the floor, allowing one to pass beneath the other so both can sequentially access a shake-out area.
A single table would have delayed laser profiling, as the fast speeds achieved using a 10 kW source would have seen the next machined sheet often waiting for the shake-out station to become free, wasting valuable production time. Even with the twin table set-up, the productivity of the ByStar Fiber is so high that two people rather than one are often needed to remove components quickly enough from each sheet before the next one arrives.
Says Devine: “We process from 3 to 20 mm mild steel on the ByStar Fiber. The 10 kW laser cuts thinner gauges three to four times faster than a 3.5 kW CO2 source, a speed advantage that reduces as material thickness rises. It translates into reductions in production cost per part of two-thirds on thinner components, down to one-third on thicker parts. This is highly beneficial when chasing cents on the price of one of our finished products.
“Fibre cutting is a more stable process and less maintenance is required, helping to increase uptime, while running costs are lower in terms of both consumables and power,” he adds. “Other benefits of the new system are better air quality in the factory, as the automation has eliminated a lot of diesel forklift movements, while extra space on the shop floor makes the kitting area more spacious and ergonomic, so there are health and safety advantages too.”
A Bystronic solution was chosen for this project partly because the compact configuration fitted into a corner of the Oldcastle factory that was previously unused, saving 1700 sq m of space. Six machine tools will fit into the area where the CO2 lasers were removed, which will enable Dromone Engineering to develop further the lean manufacturing and flow line practices it embarked on a decade ago. 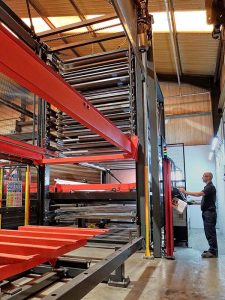 Egenton concludes: “The relationship between our engineers and those at Bystronic UK in Coventry has been highly cooperative. At the outset, the good communication facilitated the precise design of a laser cutting cell to suit our needs. During installation, Bystronic made sure that there was a seamless transfer from the old process to the new one within a two-week period, when they ran side by side. After we swapped over, we pressed the button and were in production straight away. It is unusual for such a complex system to be completely problem-free from the outset and everyone was very impressed. Since commissioning, the supplier’s service has been of a high level, which is important to us as we now have only one laser machine and therefore no production redundancy.”
For further information www.bystronic.co.uk