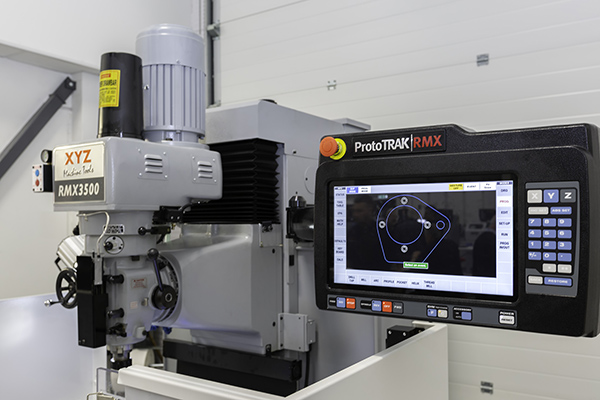 The next generation of ProtoTrak control systems from XYZ Machine Tools will exhibited for the first time at the Southern Manufacturing exhibition (5-7 February, Farnborough) on stand J210. 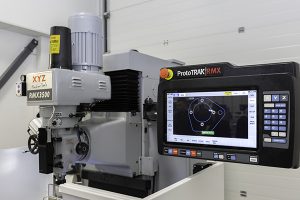 Three ProtoTrak controls have been developed. The KMX is specifically for company’s range of turret mills, while the RMX and RLX supersede the existing ProtoTrak controls on the company’s bed mills and lathes respectively.
Available as either a two- or three-axis CNC, the ProtoTrak KMX is able to create programs without any requirement for G-codes. Furthermore, the AGE (Auto Geometry Engine) facility gives the control the ability to calculate missing print data while programming. At Southern Manufacturing the ProtoTrak KMX will be shown on an XYZ KMX 2000 turret mill.
XYZ’s bed mills benefit from the RMX ProtoTrak with its 15.6” touchscreen, which extends the control’s advantage by further simplifying programming operations. The RMX also introduces additional programming help with the EPA (Enhanced ProtoTrak Assistance) feature, which provides instant access to in-depth on-screen assistance for users at any point. This can take the form of step-by-step instructions to guide users through elements such as cutting parameters, or a series of video tutorials.
XYZ’s ProTurn lathes now feature the RLX ProtoTrak control. As with the RMX system, the RLX also has a large touchscreen for improved user interaction. The makeover to the ProtoTrak controls sees a range of benefits added to both RMX and RLX systems, with gesture technology allowing fly-out windows to be integrated within the interface that can be accessed via a single swipe of the finger. An XYZ RLX 425 ProTurn lathe will highlight the features and benefits of the
RLX control.
For further information www.xyzmachinetools.com