Many fencers around the world, including winners at last year’s Olympics in Rio, use weapons manufactured by London firm, Leon Paul Equipment. What many of them may not realise is the level of expertise that goes into ensuring that the foils, epees and sabres are finished to a very high standard. To this end, a focus on deburring and surface treatment has seen two more vibratory machines installed in the factory by PDJ Vibro. 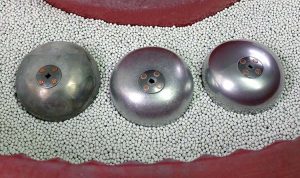 “Five years ago we started producing a new pistol grip called Evolution for our epees and foils,” explains Jack Jacob, works manager at Leon Paul Equipment, which is based in the Brent Cross area of northwest London. “However, it presented us with the problem of how to achieve the required uniformity of mottling and smoothness on the surface of the aluminium investment castings.”
So for the first time at Leon Paul, traditional hand finishing techniques were replaced with automated de-flashing and surface treatment in a vibratory bowl supplied by PDJ Vibro. Since then the company has added aluminium guards to the list of parts finished in this way. Sharp edges and flash are removed from the aerospace grade aluminium pressings that form the guards of foils and sabres.
Around half of the guards are polished manually to achieve a glossy surface. However, at the end of last year the company decided to look at automation. Again Leon Paul turned to PDJ Vibro and after the successful completion of trials, a second vibratory bowl was delivered along with a supply of small porcelain balls for burnishing the guards, and a liquid polishing medium to ensure a bright finish.
For further information
www.vibratoryfinishing.co.uk