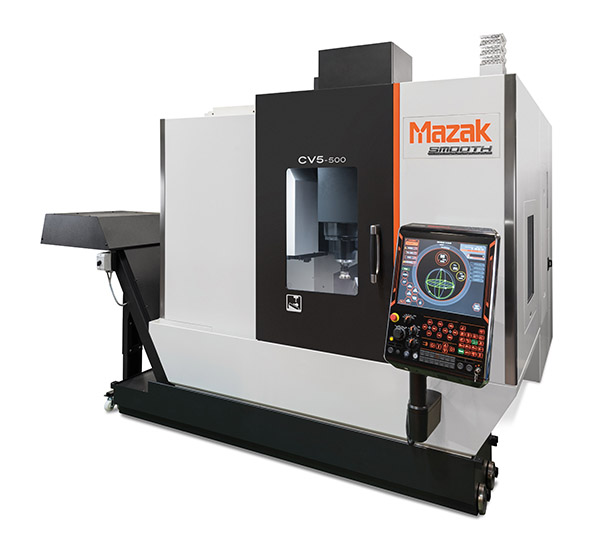 Yamazaki Mazak’s new CV5-500 entry-level five-axis machining centre is being given its UK debut at the company’s EMO Encore in December. The open house, which is being held at Mazak’s European Technology Centre in Worcester on 3-5 December 2019, will showcase 26 machines in total. 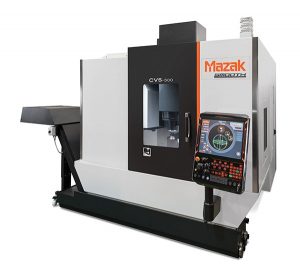 The star of the show will be the CV5-500, a new fully simultaneous five-axis machine developed in the UK for European machine users engaged in, or aspiring to, five-axis machining. Mazak’s CV5-500, which is being brought to market at a competitive price point, has a high-rigidity bridge construction with a fully supported trunnion table.
A new versatile 12,000 rpm spindle is capable of a peak performance of 18.5 kW and 119.4 Nm, making it suitable for a range of materials. Crucially, the machine has a compact footprint, ensuring its suitability for smaller machine shops, and can be easily automated with a side-loading door and robot interface. The CV5-500 is equipped with SmoothX CNC, Mazak’s specialist five-axis version of its Smooth Technology.
Another standout machine at EMO Encore will be the new Integrex i-200H ST, which is equipped with a second spindle, a newly designed lower turret and multiple turning and milling spindle specifications. In addition, the machine is equipped with a new CNC, SmoothAi, Mazak’s latest artificial intelligence control.
Mazak will also be giving UK launches to two new specialist gear cutting and measurement machines, with the highlight being the Integrex e-1250 V/8S AG. The AG series, which stands for Auto Gear, is a range of high-specification machines featuring specialist hardware, software and metrology, which in combination produce highly accurate gears compared with conventional CNC machining.
Additionally, EMO Encore will include a specialist laser open house featuring the Optiplex 3015 Fiber III laser equipped with multi-control torch and intelligent functions.
For further information www.mazakeu.co.uk