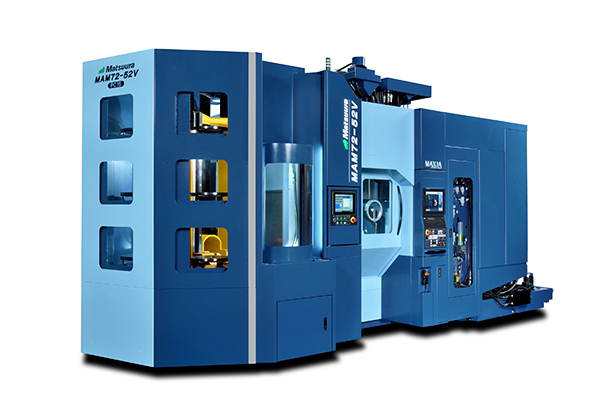 Matsuura Machinery has released its MAM72-52V, a high-speed, large-capacity five-axis vertical machining centre. Designed from the ground up and based on more than 30 years of multi-pallet automation expertise, Matsuura describes the MAM72-52V as a “factory in one machine” that enables variable-part/variable-volume production and extended unmanned operation.

The machine is equipped as standard with 130 tools on a 330 tool magazine base, a proven tower pallet system (PC15) for extended lights-out manufacturing, and a chip-removal system. Each pallet can accommodate a load capacity of 300 kg.

It was in 1995 that Matsuura first introduced its MAM72 series of five-axis machine tools, ushering in a new era of unmanned palletised and fully automated CNC machining. Synonymous with the introduction of lights-out machining, this production platform became instantly recognisable by its integrated tower pallet pool. The denomination ‘MAM’ signifies Matsuura Advanced Manufacturing.

Roger Howkins, managing director at Matsuura Machinery Ltd, says: “Investing in a Matsuura MAM72 series machine is not all about the mass production of a single part, or set of parts, although some end users utilise their MAM72 machines for that purpose. Instead, we often find customers treating their MAM72 as a ‘vending machine’, an approach that sees them “making what they need, when they need it and selling what they produce”. The machine facilitates minimal set ups following the inception of a new component with its fixtures, as well as highly optimised spindle utilisation in comparison with a manned single-table machine that requires long periods of downtime between set-ups. In addition, MAM72 machines provide proven capacity for customers to run profitably unmanned at night and weekends, while reducing operator dependency and associated labour costs.”