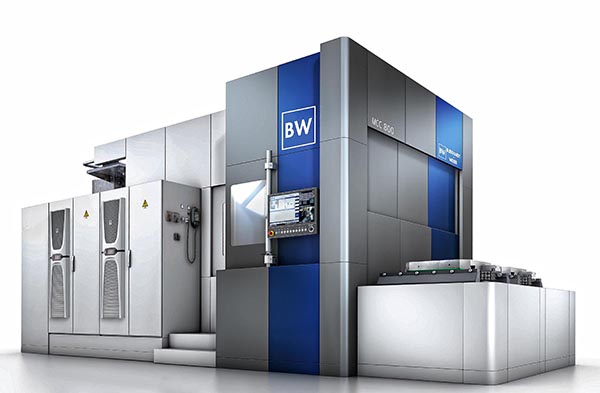 Burkhardt + Weber (B+W) has launched a horizontal-spindle model, the MCC 800, to sit alongside the smaller MCC 630 that was introduced in 2017. Availability in the UK is through sole sales and service agent, Kingsbury. 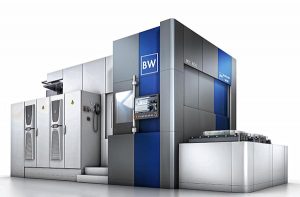 The stiffness and power of B+W’s heavy-duty MCX range has been incorporated into the compact MCC models. In the case of the latest 800 mm (optionally 1000 mm) pallet machine, the company says it has created a rigid and powerful metal-cutting centre for producing prismatic components weighing up to 2.5 tonne (including the fixture).
B+W’s four-axis machine, including C-axis rotary table, has twin pallets and a 1400 x 1200 x 1400 or 1600 mm working envelope, and a footprint of 8.8 x 3.5 x 3.8 m. MCC series models are also the first standard machines to enter series production at the company’s Reutlingen factory in southern Germany, which until now has built machining centres to customer order.
The MCC 800 can deliver 1300 Nm of torque continuously if a 41 kW gear-driven spindle is chosen instead of a 30 kW/300 Nm motor spindle. There is a further alternative of a +45/-110° tilting spindle of identical power that adds a fifth CNC axis. Spindle speed is up to 6000 rpm, optionally 10,000 rpm, while an ISO50 tool interface can be specified instead of the standard HSK-A100. The tool changer, which has few moving parts, serves a tool magazine with 64 pockets that can be expanded to 320 on request.
Productivity is promoted by a cutting feed force of 17.5 kN and 7 m/s2 acceleration to 60 m/min rapids in the linear axes, which are fitted with linear scales for feeding positional data back to the Siemens Sinumerik 840D sl control.
For further information www.kingsburyuk.com