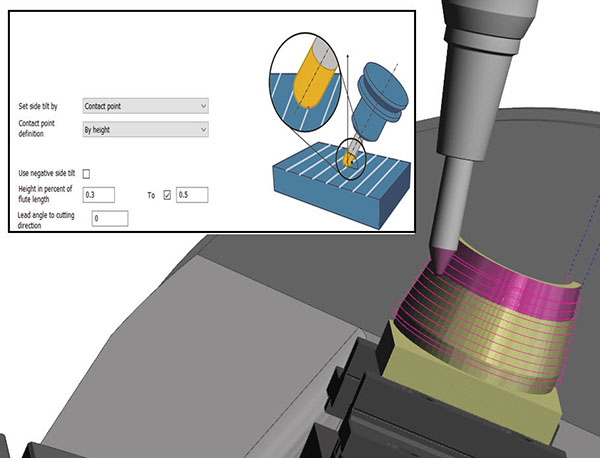 The development of a specific five-axis ‘Tilt’ control strategy, combined with a barrel cutter, is the most significant enhancement in the latest release (2020.0) of Edgecam from Hexagon Manufacturing Intelligence’s Production Software division. 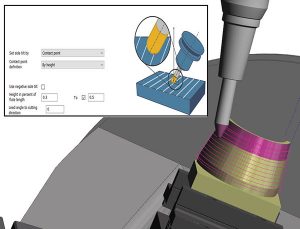 John Buehler, brand manager, says barrel cutters are recognised as one of the fastest tools when performing five-axis machining, and are now fully supported in the Edgecam Toolstore. As well as ‘side tilt by contact point’ capability, the ‘Advanced 5-axis’ cycle also offers further gouge checking in the ‘swarf’ command, along with extra ‘ink’ control in all strategies.
Several newly developed and enhanced features in Edgecam 2020.0 provide increased productivity for both milling and turning users, while the recently introduced Edgecam Inspect module includes 13 upgrades.
Mindful of the need to generate quick tool paths and reduce production costs, Edgecam 2020.0 offers a performance boost when either roughing or profiling a solid model. Essentially, the machining engine will only compute data constrained within the boundary, ignoring the rest of the model. This functionality decreases the cache size, while generating faster tool paths.
Previously introduced in the ‘Hole’ cycle in the 2018 R1 release, the ‘Deep Hole’ strategy has been enhanced, justifying the creation of its own individual cycle. The original modifiers have been improved, and further control tabs have been added to the cycle, giving greater control over the tool path.
Within the ‘Turning’ environment there is a newly devised machining cycle – ‘Thread Profiling’. Reacting to a high frequency of enhancement requests from customers in this area, Edgecam 2020.0 allows users to machine complex form threads such as VAM and Acme. The cycle provides both roughing and finishing strategies, permitting users to specify their own thread forms.
For further information www.edgecam.com