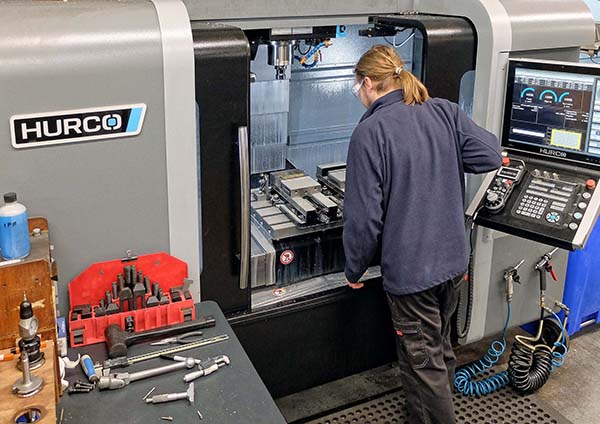 Loadpoint Micro-Machining Solutions, a manufacturer in Cricklade that more than 40 years ago invented the industry standard saw for dicing semiconductor wafers, avoiding current leakage in electronic components caused by the old method of scribing and snapping, has brought all of its metal cutting in-house following the purchase of three Hurco machine tools. 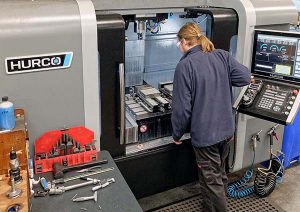 Previously, larger castings that form the bases of Loadpoint’s products had to be subcontracted for milling. That cost is now saved, added to which, control over lead-time and quality is much improved. Drawing tolerance is ±5 µm for both straightness and flatness over the 750 mm length of the largest base casting for a Loadpoint Macroace dicing saw. This accuracy is being exceeded on a 20-tonne, bridge-type Hurco DCX22 machining centre with 2200 x 1700 x 750 mm working volume.
Loadpoint’s managing director Clive Bond says: “We need to hold a high level of accuracy when manufacturing our machine components to underpin the precision our customers need when sawing their materials with a resin- or metal-bonded diamond grinding blade, which can be down to 15 µm wide.
“In addition to semiconductor wafer dicing, these days many applications involve cutting PZT, a piezoelectric ceramic material used for a multitude of applications from parking sensors to ultrasound scanners,” he continues. “Glass for making optical filters, for example, and alumina for the manufacture of hybrid circuits, are also frequently processed.
“Generally, our equipment has to saw material within a tolerance of ± 3 µm over a working area of up to 12” diameter. However, a recent application involved producing an inkjet printer head from 200 µm thick PZT to significantly higher precision. Over a 60 mm length, 600 µm deep cuts had to be spaced at 100 µm intervals with a pitch-to-pitch accuracy of under 1 µm. Tolerances of this order require that the structure of our machines is extremely precise.” 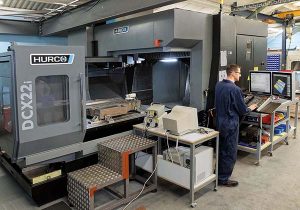 A 1 m deep concrete foundation was prepared to support the DCX22. Hurco engineers spent considerable time and effort during the commissioning phase to ensure that the required machining accuracies could be attained. They are verified using a Taylor Hobson autocollimator.
Bond goes on to explain the technique that allows tolerances within ±5 µm to be held over such a large distance. The secret lies in unclamping the heavy casting and simply restraining it in position on the table during the final operation, which involves taking only very light passes with a milling cutter. The process was successfully proved out at a Midlands subcontractor using a similar Hurco DCX machining centre prior to Bond’s investment decision.
Not only do Loadpoint’s FEA-optimised structures have to be rigid and accurate to support the three linear axis motions and rotary table movement – all CNC axes having 50 nm resolution thanks to Heidenhain encoders – but so also does the assembly carrying the 60,000 rpm air bearing spindle. Runout has to be better than 50 nm TIR.
To this end, a Hurco TM10i lathe replaced an old manual lathe as part of the re-equipment project. This machine is used to turn the stainless steel or titanium flanges that support and clamp the circular saw blade. To control the bore and complex flange profile to a tolerance approaching a single micron, they are sent to a sister Loadpoint company for cylindrical grinding, followed by precision balancing.
Another role of the new lathe is to turn a stainless-steel disc that forms the carrier for a vacuum chuck that secures material during dicing. After heat treatment, the component is held in a bespoke fixture on the third new Hurco machine on-site, a smaller VM20i three-axis machining centre, where recesses are milled over one face for subsequently containing the adhesive that holds a high precision, ceramic insert in place. Many of Loadpoint’s smaller castings and components are also produced on the VM20i, which replaced a manual-tool-change CNC milling machine. 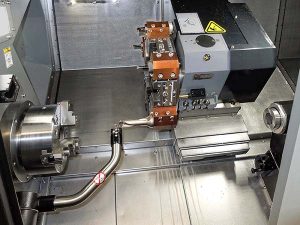 Machinists at Cricklade were familiar with Heidenhain and Fanuc controls, so there was initially some scepticism about using a new CNC system, Hurco’s proprietary WinMax, which employs a second screen on controls fitted to the manufacturer’s larger machining centres. The system has a reputation in the market for ease of conversational programming. Bond confirmed that his operators were immediately convinced of its suitability during a demonstration at a Hurco open house held at the company’s High Wycombe showroom and technical centre.
Such is the software’s ease of use that menu-driven programming on the shop floor using the touchscreens on the controls is carried out all of the time at Cricklade, to the exclusion of offline program preparation via CADCAM, even though Loadpoint machine components are created in CAD and available as solid models.
For further information www.hurco.co.uk