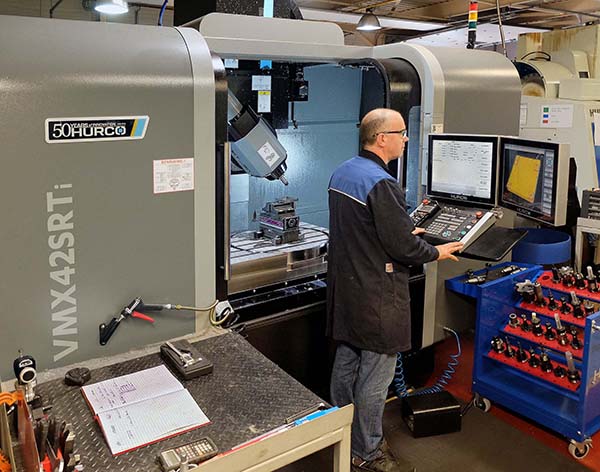 Having doubled the size of its premises in 2016 and the same year purchased its first five-axis machining centre, a Hurco VMX42SRTi with swivelling B-axis spindle, subcontractor Almond Engineering has installed a second, similar model. 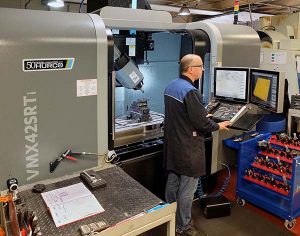 Managing director Chris Smith favours this style of five-axis machining centre over the trunnion-mounted rotary table arrangement due to its versatility for tackling a greater variety of work, including the four-axis machining of large components.
Last year saw the arrival of a Hurco VMX30i, purchased with a fourth-axis rotary table to speed set-ups, increase production efficiency and reduce delivery times, plus a larger three-axis VMX60i with 1525 x 660 x 610 mm working volume that significantly extends the size of component that can be machined at the Livingston site.
Overall spend in 2018 exceeded £400,000, and half that figure is due to be spent again this year, including on new software. Driving this level of investment was 25% growth in 2016/17, a further increase in turnover the following year and a predicted 19% rise this financial year. It is a pace that Smith describes as “almost too fast” in view of the perennial difficulty in hiring skilled staff.
Much of the growth has come from winning new business from the medical sector in Scotland, such as the assembly of lines for producing contact lenses and the machining of parts for operating theatre equipment. The industry now accounts for 8% of the company’s revenue by value.
Semiconductor firms across the central belt of Scotland are the other main sector serviced, while contracts are also received from the ever resilient aerospace and defence industries. A hallmark of the subcontractor’s service is significant design input into the mechanical engineering aspects of the contracts it undertakes.
For further information www.hurco.com/en-gb